Reviews are interesting beasts. The first I read on this game stated it was essentially Fallout New Vegas 2. The next review I read stated that if you were expecting New Vegas 2 then you will be disappointed.

It was therefore with a little confusion that I installed and romped through the worlds that are on the outer of something else. Before I get into that though I'll put a disclaimer on here. I can't say I really enjoyed Fallout New Vegas. It was really slow and there didn't seem much of anything going on. I spent a good long time wandering around the desert looking for things to do. Now, this could completely be my fault as I often forget the main storyline in order to sub-quest it out or just see what's out there. However nothing ever really bought me back to what I was supposed to be doing. Something about being shot and buried I vaguely recall. The thing is the fallout games are so mind-numbingly bleak and drab that you don't tend to want to spend much time there. At least I don't. Fallout 4 allows you to build your own little bases with pretty fairy lights and vendors which at least allowed you to find some refuge from the drab. The Outer Worlds setting on the other hand does away with the bleak, at least outside of the towns and cities. Space it turns out is wonderfully colourful and has many, many ways of killing you. If you like the bleak and rundown just pop into any town and you will feel right at home.

I'd describe The Out Worlds as a flavour of Fallout. You can certainly see the influence, I'm pretty certain the computer terminal noises are just a straight copy. The retro-futuristic aesthetic and deeply corrupt advertising also put you in the Fallout mindset. The idea of different worlds allows for some variance although you will find the wilderness is mainly inhabited by the same sort of animals and villains wherever you travel. Who decided to transport the giant ape around the colony I'll never know.

So what's the difference? Well, you have the option of running around with two of your crewmates which makes travel a little less boring. They do have a chatter to one another occasionally. The voice acting is great throughout by the way. Some of their quests are a little weak, getting ready for a date is hardly the stuff of legends and let's face it that's what we're aiming for. I was expecting a Neverwinters night-style split of your crew if you didn't keep them onside but from my playthrough so far that doesn't seem to have happened. They may grumble a little when they don't agree with you but they never seem to up sticks and leave. Maybe I've just not been obnoxious enough, hard to believe I know. So companions are good. Especially good as most things, most of the time seem to focus their fire on you. This isn't really a problem until you get to some of the more epic challenges. These, for me at least, ended with a lot of cries from my crew about how they will make sure I'm never forgotten, as the world and my inevitable pain fade to black. I deal with this largely by hiding behind rocks, I'm a coward at heart, or by finding a piece of scenery that confused the enemy and then picking them off from a distance. This strategy failed towards the end of the game however when you have no choice but to pony up. This I think is the undoing of the game, if you've gone down the wrong skills paths, and there is nothing to suggest which you will need, then you can find yourself in serious trouble. To the point where you have to go back to an earlier save and reconfigure your character. This kind of drained the fun and the story out of the game. I'd made myself a bit of a generalist but specialised in long rifles, turns out that just doesn't cut it towards the end. The idea of having played in a certain way just to have to completely change your character seems to take the sheen off things. If you want a hint for a workable build let me know or just jump on Reddit. This raises the question of why the other options are in there. Some seem to have little use but you have no way of knowing.
Another slight niggle for me was that it wasn't really clear how much more of the game I had to do. I thought I was entering into the second act yet it turned out to be the last. When compared to the open world that I remember from Skyrim this just seemed fairly short. This adds to the problem regarding incorrect builds. If I'd have known we were entering the end game I would have spent a little bit more time obtaining the best weapons, armour, and skills. Maybe I'm just making excuses.

To conclude. I enjoyed the various stories of the people of the outer worlds. For me, it makes for a passable game but I'm glad I picked up a copy for half-price. I don't feel this game does anything better than the Deus Ex series or any of the Dishonoured series. These seem to allow you to play in a style of your choosing without taking a run-up in order to hoof your personal soft regions towards the end.

Negatives:
Score: 6/10
If you like this kind of game you will have some fun, my advice would be to have that fun once it's discounted. 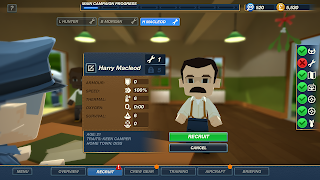